Where Swing is King!

Recorded by Louis Armstrong with Gordon Jenkins for Decca on November 28, 1951 in Los Angeles.

Louis Armstrong’s career in show business stretched from the early 1920s through the 1960s. No career in show business lasts that long without some nimble managerial moves being made by someone along the way. Louis led a big band from 1935 to July 11, 1947. His last recording session with his big band was on March 12, 1947. Being a multi-dimensional entertainment personality, Louis during that time always had several work opportunities gestating simultaneously. These included, in addition to leading his big band, performing as a guest with various jazz groups, performing on radio as an always-welcome guest, and appearing in Hollywood feature films. He, like all other leaders of big bands in the mid-1940s, was finding it increasingly difficult to offset the expenses of a big band on the road because of the widespread and ever-deepening depression in the touring band business then. By 1947, Louis and his often vilified manager, Joe Glaser, were actively seeking new musical formats where his talents could be presented. (Below left Louis with his manager Joe Glaser.)

A seminal event in this regard was a small-group jazz concert at New York’s Town Hall on May 17, 1947. This event, which was produced by impresario and publicist Ernie Anderson, was basically intended to present Louis playing jazz with compatible and experienced musicians. At that time, Anderson himself had become a controversial figure. Here is why: “Anderson was most closely associated with Eddie Condon’s crew, producing a series of popular concerts at Town Hall. Esquire Magazine asked Anderson to edit its annual Jazz Book earlier (in 1947), but he used the opportunity to publicize Condon and his circle of musicians, although they hadn’t won any awards. Almost instantly, 18 of the 20 critics who had voted in the (Esquire) poll – including Leonard Feather, John Hammond and Barry Ulanov – severed their connections with Esquire, claiming Anderson turned the 1947 Jazz Book ‘into a press manual for Eddie Condon.’ Next came a letter from 34 angry musicians asking ‘Why does the list of so-called ‘best’ records ignore good recordings made by younger musicians in favor of records made by Dixielanders?’ The letter was signed by, among others, Miles Davis, Duke Ellington, Nat King Cole, Ella Fitzgerald, Dizzy Gillespie, Coleman Hawkins, Billie Holiday, and topping the list, Louis Armstrong. It marked the end of the Esquire era in jazz journalism.” (1)

Louis did not like being drawn into controversies, musical or otherwise. Unfortunately, for the remainder of his life (he died in 1971), he would increasingly be confronted by contentious situations that often had nothing to do with music. Dealing with those situations required all of the patience, tact, diplomacy and charm he could muster. Whether he liked it or not, Louis was discovering that he was larger than his abilities as a musician, singer and entertainer. He was evolving from being a show business personality formed in the crucible of Jim Crow America, to being an American cultural icon. It was an uncomfortable progression.

The success of the 1947 Town Hall jazz concert provided the impetus for Louis to begin the next phase of his career, where, most of the time, he toured with a small group of jazz all-stars instead of a big band. This proved to be a great success for him musically and commercially. Of course, he continued, as ever, with his side hustle appearances in feature films, on radio, and increasingly through the 1950s and 1960s, on television. As the 1940s ended and the1950s began, Louis Armstrong had reinvented himself. (Above right: Armstrong pictured on the cover of Time Magazine on February 21, 1949. This imprimatur signified that he was gradually becoming an American cultural icon.)

Louis Armstrong’s ongoing and indeed increasing popularity as a singer through the 1950s and 1960s created many opportunities for him to sing and record songs that might seem somewhat out of character for him. However, as we have come to realize in the decades since Louis’s death, nothing was really out of character for him because whatever he did, whether it was playing his trumpet, engaging in invariably happy and often humorous repartee on radio, television or movies, or singing, the immense power of his personality subsumed the occasion. In other words, Louis’s personality and the humanity he always projected were larger than any material he was confronted with as a performer.

A perfect example of this is his recording of the song “It’s All in the Game.” Arranger Gordon Jenkins was riding high at Decca Records in the early 1950s, consequently, he was paired with many of that label’s recording artists then, including Louis Armstrong. How this song came into being and why this recording came to be made by Armstrong and Jenkins is interesting. 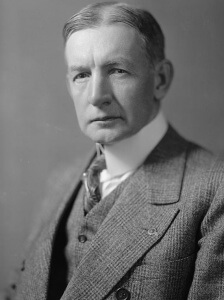 “It’s All in the Game” is a pop song whose most successful version was recorded by singer Tommy Edwards in 1958. Carl Sigman composed the lyric in 1951 to a wordless 1911 composition titled “Melody in A Major,” written by Charles G. Dawes, who later became vice-president of the United States under Calvin Coolidge. It is the only No. 1 single in the U.S. to have been co-written by a U.S. Vice President or a Nobel peace Prize laureate (Dawes was both). (Charles Gates Dawes is pictured at left.)

Dawes, a Chicago bank president and amateur pianist and flutist, composed the melody in 1911 in a single sitting at his lakeshore home in Evanston, Illinois. He played it for a friend, the violinist Francis MacMillen, who took Dawes’s sheet music to a publisher. Dawes, known for his federal appointments and a U.S. Senate candidacy, was surprised to find a portrait of himself in a music shop window on State Street in Chicago with copies of the tune for sale.

The composition, often dubbed “Dawes’s Melody”, followed him into politics, and he grew to detest hearing it wherever he appeared. It was a favorite of violinist Fritz Kreisler, who often used it as his closing number at concerts It was recorded in the 1940s by Tommy Dorsey (as “Melody in A” for V-Disk) as a concert piece featuring his virtuoso trombone playing.

In summer 1951, the lyricist Carl Sigman came up with the idea of pairing a lyric with  “Dawes’s Melody.”  (Dawes had died in April of that year.) The new song, entitled “It’s All in the Game,” was recorded that year by Dinah Shore, Sammy Kaye and Carmen Cavallaro. But the first recording of it that had any success was by singer Tommy Edwards in August of 1951. Edwards’s version reached No. 18 on the Billboard Records Most Played by Disk Jockeys survey dated September 15, 1951.

The people at Decca noticed, and a “cover” version was put into the works. Since the range of the melody of “It’s All in the Game” made it somewhat difficult to sing, a skilled arranger would have to revise the melody a bit to make it lay better for a singer. Enter Gordon Jenkins. And what better singer than Louis Armstrong, who was also contracted to Decca, to do the cover recording? (2)

Gordon Jenkins’s arrangement on “It’s All in the Game” is basically cast in two parts, each a chorus long. The first is an unadorned exposition of the melody played by the strings in 3/4 time. Jenkins’s writing for the strings verges on the saccharine, but is nevertheless effective to communicate the melody to the mainstream listeners Decca was marketing this recording to.

The second part is where Louis performs vocal sorcery. Just at the point where the music, if continued as it had been played for another second would become cloying, a transitional passage (modulation) appears, played in 4/4 time by the trumpets and saxophones. When Armstrong begins to sing, it is as if the sun suddenly appeared from behind a bank of clouds. The music is now warm and affecting. Yes, the sound of Louis’s voice is a marvelous contrast to what had come before, and his phrasing, as always, is the essence of swing.

But what is most powerful is the emotional charge he imparts to the lyric, which is by no means particularly poetic. Louis is not just singing, he is casting a magic spell. I’ve listened to this recording many times, and the moment Louis starts to sing, I always get goose bumps. And, as the performance is winding down, Louis scats ever so gently. To say that he was a masterful singer would be a mammoth understatement.

The recording presented with this post was digitally remastered by Mike Zirpolo.

Stereophonic sound recording was just becoming viable and it was decided to cut a stereo version of “It’s All in the Game” with a  rock and roll arrangement. The single was released in July and became a hit, reaching number one for six weeks beginning September 29, 1958, making Edwards the first African-American to chart at number one on the Billboard Hot 100. It would also be the last song to hit number one on the R&B Best Seller list. In November, the song hit No. 1 on the UK Singles Chart. The single helped Edwards revive his career for another two years.

Here are links to some other great recordings by Louis Armstrong here at swingandbeyond.com:

This site uses Akismet to reduce spam. Learn how your comment data is processed.

"Dancing in the Dark" Composed by Arthur Schwartz; arranged by Lennie Hayton. Recorded by Artie Shaw and His Orchestra for Victor on ...

"Intermezzo (A Love Story)" Composed by Heinz Provost; arranged by Bill Finegan. Recorded live by Glenn Miller and His Orchestra on their ...

It's All in the Game (1951) Louis Armstrong with Gordon Jenkins

"It's All in the Game"  Composed by Charles Gates Dawes (music) and Carl Sigman (lyric); arranged by Gordon Jenkins. Recorded by Louis ...

"I'm a Ding Dong Daddy (from Dumas)"  Composed by Phil Baxter; head arrangement by the Benny Goodman Quartet. Recorded live from a ...